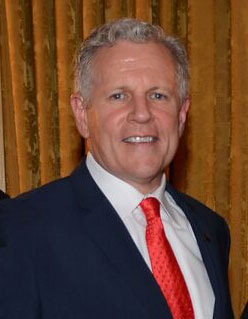 On April 6, Jobs for New Jersey’s Graduates board member, Richard Nordstrom, was honored as Healthcare Marketer’s Exchange Humanitarian of the Year.  Richard has devoted hundreds of hours to the Jobs for America’s Graduates (JAG) program over many years–serving on the National Board of Directors, directing numerous new national communications initiatives, meeting with state JAG programs across the country and now as a founding member of the JNJG advisory board.

Richard became devoted to JAG in early 2008 upon visiting a local program in Little Rock, Arkansas.  There he learned that since 1981, JAG has been delivering consistent, compelling results. Richard explains: “I heard a number of stories when I visited Arkansas. One in particular drove my engagement.  It was a young man who was at that time a junior at University of Arkansas.  He talked about growing up with a mom in prison and he never knew a dad. He grew up in the foster home system bouncing from home to home where he was physically and emotionally abused. He ran into JAG in high school and a JAG specialist who changed his life, kept him in high school, encouraged him academically, let him stay with his family and played the role of a father.  It was heartbreaking and inspirational. I was sitting next to the JAG specialist who was this big high school football coach as he glowed with pride for this well-spoken young man.  I heard five more stories

just like that and have heard hundreds since. I had to do something, in some small or large way, to help.”

Richard is most gratified by the successful expansion of JAG in New Jersey. He engaged alongside the National JAG team to inform NJ state officials in the Departments of Education and Labor as well as Governor Chris Christie and his staff.  After two years involving meetings, reports and private sector efforts, JAG was finally accepted into the Garden State for the 2011-2012 school year, funded by both the DOE and DOL.

Due to the impressive results of the JAG initiative, a public-private partnership was established with the New Jersey Chamber of Commerce Foundation in 2016 to manage JAG and the program was expanded to a total of ten sites.  Richard believes these young people have enormous untapped potential.  Their stories are his inspiration.  JAG allows him to help impact tens of thousands of young people every year to fulfill their dreams.

Richard Nordstrom is Founder and CEO of Liberate Ideas, Inc.

Sign up for quarterly updates and news from the NJCCF